"Our goal in building Alpha League Racing was two-fold. The first step was to build a 3D composable car NFT that could be upgraded, adapted and utilized in multiple games/scenarios across the blockchain. The second goal was to build a fully functional 3D racing game that rewards players for spending time in the game and allows you to use your rewards to unlock new levels, upgrade your car, play in competitions and duel other players in a race for “pink slips”.

While being a fun, casual game, there exists an underlying incentive structure to reward players that spend a substantial amount of time playing the game. There are two main tiers of gameplay: the first is free-to-play and the second is the full-scale play-to-earn game.

In the free game, only 1-2 different cars are playable with 1-2 free tracks. This version of the game could be considered a demo of the larger game, that allows anyone to preview the style of gameplay as well as join a quick, casual racing session.

The full play-to-earn game requires ownership of an Alpha League Racing vehicle. This NFT car allows you to join official races to try and win the ingame token. By playing the game and winning races, players earn tokens that can be used to unlock new tracks, customize their cars, buy/sell individual components and compete in League competitions for larger prizes. Another aspect of this game is the ability to challenge players one-on-one to risk it all, and race for “pink slips” – in other words betting either tokens or your own car on the outcome of the race.

In subsequent weeks, further development of ALR's lite paper, game mechanics, token details and more will lead to changes in this framework and the prospective game. As changes are made, the lite paper will be re-published publicly for our holders to view."

Woof Solana is the fastest growing online community in Crypto, with over 50,000 followers across all platforms.

Check out our WOOF Merch

A fixed percentage of all merch profits (voted by the DAO) are going dog shelter charity. 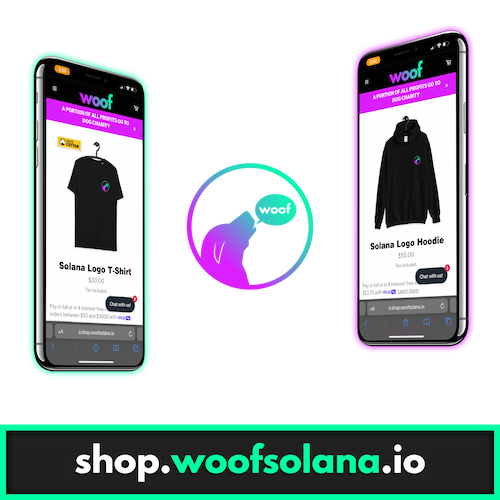 9Vimw9nBphfHpMfRDYAajTmddiMa6fi3BVAHcyYjAhU4
If you'd like to donate to the Devs, you can send
SOL, USDC or WOOF here. Thank you for your support!

We Own Our Future✊
Team Donation Wallet:
9Vimw9nBphfHpMfRDYAajTmddiMa6fi3BVAHcyYjAhU4
Join the #WOOFPACK